Game on the food chain online

2nd grade science game for kids - Identify vertebrates & Invertebrates 2nd grade science game for kids, differentiate animals with backbone and animals without a backbone. This is an interactive online game quiz in which players need to classify animals either as vertebrates or invertebrates. Its is a pirate game with two opposing ships aiming at each other with canon shots. To be victorious, players need to answer as many problems as possible.Improve bilogy skills on classification of animals- Vertebrate and invertebrate worksheet >>>

Let’s start this lesson by first clarifying what the words vertebrate and invertebrate actually mean. The word vertebrate comes from the Latin word vertebra. Vertebrates are animals that have a backbone. These are generally animals within the phylum Chordata. Examples include the following five classes: fish, amphibians, reptiles, birds and mammals.
Invertebrates on the other hand are animals that do not have a backbone. Because of this lack of a backbone, some invertebrates have a hard external shell to protect their internal organs called an exoskeleton. Examples of invertebrates include earthworms, insects like spiders and cockroaches, jellyfish and snails.
Humans are obviously vertebrates. You can tell because if you touch the middle part of your back all the way to the back of your head, you can feel a hard rugged bone line which spans across. The backbone is what you feel but within it, there is a tube-like structure that contains bundles of nerves covered by the meninges and surrounded by the cerebrospinal fluid. The backbone provides structural support to our body’s weight. Without the spinal cord, you will not be able to carry all the flesh on your body around. It also protects the nerves found within the spinal cord from damage. The nerves within the spinal cord are vital pathways for communication between the brain and other parts of the body. Without this vital function, humans will not be able to feel or sense anything.
To better understand why humans are classified as vertebrates, take a look at the diagram of a human skeleton.
As mentioned earlier, invertebrates do not have a backbone. A snail is a good example of an invertebrate. Notice that snails tend to have a hard shell that protects them. They carry this shell everywhere they go because without it, their internal organs will be vulnerable to damage from external factors. Earth worms are another example of invertebrates. They do not have a hard exoskeleton like a snail but they do have a moist, protective external cuticle.
I hope you can now distinguish between vertebrates (animals which have a backbone) and invertebrates (animals that do not have a backbone).

Is a frog a vertebrate or invertebrate ? Is a snail a vertebrate or invertebrate ? Let’s address these questions in the order in which they came. First and foremost, vertebrates are animals that have a backbone or spinal cord. It is easy to demonstrate this to students by asking them to touch their backbones in their backs and confirming if they feel it. If you look at the skeleton of animals that have a backbone, you will see a stretch of bones starting from the head right down to the back. These bones enable us humans to stand upright. On the other hand, there are organisms that do not have the central backbone system. These organisms are called invertebrates. Back to our first question concerning a frog; the answer is yes. A frog is a vertebrate because it has a spinal cord. Check out the skeleton of a frog and you will see its backbone. Back to a snail, it is an invertebrate. Although snails have a hard exoskeleton, they do not have a backbone. Haven laid down this foundation, let's look at some vertebrates and invertebrates examples.

There are loads of examples of vertebrates around us. Think about all domestic animals and pets around us. Those are examples of vertebrates. Examples include the following: cat, dog, horse, chicken, hamster, duck, etc. There are also wild animals in that list like lions, tigers, zebras, fox etc. Furthermore, snakes, birds, frogs, eels, fish etc fall under this category. 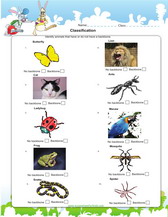