The Life Cycle Of A Frog Online Game

Frogs are interesting creatures which children learn about in their story books. They are often presented as fun creatures living on insects trapped through their long tongues. Did you also know that frogs have an interesting life cycle? In this page, students will learn about the life cycle of a frog by dragging and dropping the different phases in a diagram. This frog life cycle diagram is what students will normally be asked to draw on a worksheet. We have made these stages easy through an online game. Frogs lay their eggs in ponds. These eggs metamorphose into a tad pole. Tadpoles have characteristics of fish; they have a long active tail which helps them to swim in water. The tadpole later matures into a form of tadpole that has two legs emerging from both sides of the body. Later the tail of the tadpole shortens while two more limbs add to the body. This stage is called a froglet because it looks pretty much like a frog but for the existence of a short tail. The tail gradually falls off at the frog becomes an adult. Learn this life cycle through a fun game online. The game is a science activity for 1st grade, 2nd grade, 3rd grade, 4th grade, 5th grade and 6th grade. In the UK system of education, this is equivalent to science for year 2, year 3, year 4, year 5, year 6, year 7 and year 8. 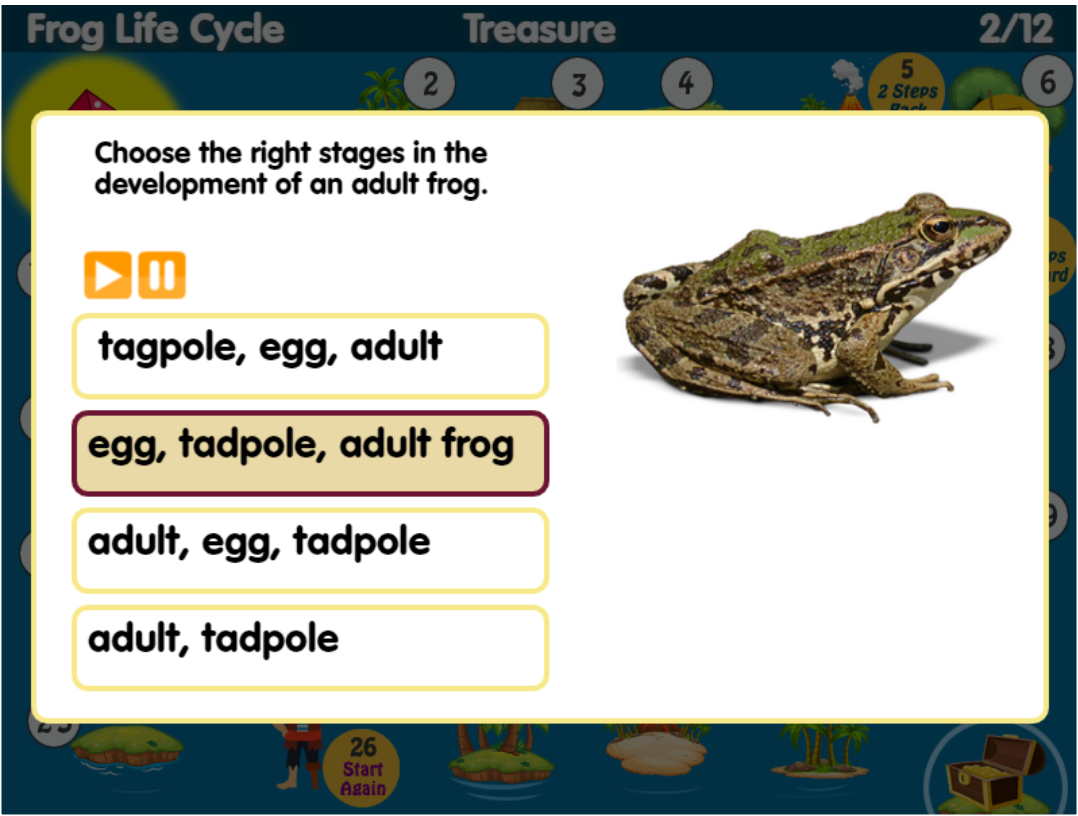 This game is an interactive pirate game which children can play in the classroom and learn about the different stages in the frog's life cycle. Children will be shown pictures of each stage and asked specific questions about that stage. There is a fun part to this MCQ quiz, it is the pirate game. If you have never tried this game, we reserve the surprise for you. Click on the image and try out the game. It is so much fun. Play !

The life of a frog is full of changes. It goes through puberty and adulthood with a multitude of changes. To survive, it must shed its slimy skin and put on more flesh. A tadpole loses its horn teeth and tongue muscles. In addition, its large intestine contracts to accommodate the change in food, and it develops a thick, waxy layer to keep its body temperature constant.

Frogs have permeable skin through which they can breathe and drink. Because frogs live both on land and in water, scientists can monitor the health of an ecosystem based on the size and abundance of frog populations. There are more than 400 species of frogs worldwide. You can find a frog that fits your classroom's theme and activity.

The frog's eyes are an important feature of this unique animal. A frog's large eyes allow it to easily spot predators and prey. The large eyeballs help it catch its dinner. During the breeding season, frogs lay their eggs in the water. The eggs are then carried back to the nest by the female frogs.

A frog has one internal organ, the thyroid gland. It also has a pair of front legs and a face shaped like a triangle. During metamorphosis, a tadpole becomes an adult frog. Its hind legs are also visible. Once the frog has passed the froglet stage, it becomes a fully grown 'frog'.

The tadpole of a frog does not have external ears. It has a tympanum, a small circle behind the eye. The size of the eardrum is proportional to the frequency of the frog's male call. The eardrum is connected to the lungs. The hind legs of a frog indicate how far the metamorphosis process has gone.

Most frogs lay their eggs in water. Their eggs do not have a shell, but need moisture to stay alive until they hatch. Some frog species lay their eggs above the water in moist leaves. When the tadpoles hatch, they fall into the water. When they hatch, the tadpoles are not very active for two weeks. A tadpole spends the first few days ingesting the yolk from the egg as a food source.

The color scheme of the frog is not limited to the male. The female frog chooses the male based on the color of her body. The male then jumps on the female and grabs her when she releases her eggs. Most frogs fertilize the eggs outside the female's body during amplexus, which can last hours, days, and even months. Most tadpoles lay two to 50,000 eggs.

Most frogs are nimble. Some can jump 20 times their body length! Unlike snakes and turtles, frogs can hop anywhere! The Goliath frog in West Africa can grow up to 15 inches long and weigh seven pounds. The Cuban tree toad is half an inch long. A frog can live up to 20 years, but not if it lives in an aquarium.