The Life Cycle Of A Fish Online Game

Fish are aquatic dwellers. There are several species of fish in existence. However before a fish becomes an adult as we know it, there are several processes that go on in the background which we don’t tend to see. In this page, students will learn the life cycle of a fish through an online game. Fish start their life cycles when a mature female lays eggs in large numbers. These eggs are fertilized by a mature male. The fertilized eggs later hatch into what is called a yolk sac fry - a larval stage where the fish has an attached yolk. The yolk is rich in food nutrients which the larva relies on for its subsistence. The mature version of this stage is when the larva starts feeding itself independently. This stage will mature into a juvenile fish which later transforms into an adult over a given period of time. At the early stages of a fish’s life, there are chances that many don’t make it to adulthood. The main reason is that at this stage they are vulnerable to predators in water that hunt them for food. Young fish can also be caught and eaten by birds hunting for food in water. This game will teach you the life cycle of a fish in simple steps. The game is a science activity for 1st grade, 2nd grade, 3rd grade, 4th grade, 5th grade and 6th grade. In the UK system of education, this is equivalent to science for year 2, year 3, year 4, year 5, year 6, year 7 and year 8.

Interactive Diagram Of A Fish To Label 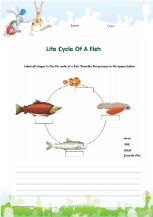 The life cycle of a salmon begins when a female's nest of eggs are fertilized by male sperm. These fertilized eggs develop into embryos that later on hatch into tiny fish called alevins. Alevins are small fish with a yolk sac still attached to them. The yolk sac serves as a food storage from where alevins feed for months, and grow in size. Eventually, the yolk sac is completely consumed and a new stage of development begins. The fish at this stage is called the fry.

It is worth mentioning here that mature salmon eventually head to the sea but at this stage, they are still restricted in their movement to the natal stream where they hatched.  They may spend like 1 to 2 years in this area before migrating to sea. The fry regularly swim to the surface to fill their swim bladders with oxygen while feeding on other smaller organisms. The fry are very vulnerable to predators and hiding under logs, rocks and shade is crucial for survival.

3. Migration towards the sea

The fry grow into salmon that begin their seaward migration. This stage is characterised by smolting and the development of scales that are silver colored. The young sloths grow and transform, adapting to their new environment as they go along. Predators are actively eliminating members of the group as they go. Only the fortunate ones will eventually get to the ocean.

4. Life in the ocean

Some salmon end up in coastal waters while others migrate far in search of feeding grounds. Some may end up spending one to seven years in the ocean. What is interesting about salmon is that they don’t just end up in the ocean. Some of them end up back in their natal stream.

It sounds like a scene out of a movie but it is actually true that salmon somehow return back to the streams where they were hatched. It is unknown exactly how they do that but anecdotal evidence suggests that salmon are guided by scents and chemical cues to find their way back to where they started their lives. It is during the process that they in turn prepare for spawning. The journey is long and requires  a lot of energy that is drawn for fat storage in their bodies apart from fat from the reproductive organs. Male salmon develop hooked noses called kype during this time. These help them to fight and dominate their peers. Children have seen a lot of scenes on TV where bears catch salmon in rivers as they migrate for spawning. Predators are very active during this time. The few that arrive at their final destination lay eggs that are fertilized and the whole process begins all over. The eggs are laid in little depressions created by female salmon. Once the eggs are laid inside, the female salmon covers them with gravel. The male and female will live here until they die and constitute food for other organisms in the ecosystem.

With pollution on the rise and habitat destruction by humans, salmon are facing problems following their natural cycle to the end. Ecosystem disturbance by man is affecting this cycle to the extent that salmon populations across the globe are in great decline. Mankind needs to be actively involved in environmental protection to save the wild salmon.