The Life Cycle Of A Chicken Online Game

The Life Cycle Of A Chicken Online Game. This is an interactive online diagram in which students learn teh stages in the life cycle of a chicken from eggs, to hatchlings, chick and then adult chicken. It is a drag and label diagram which cam be completed online. This is a great classroom teaching tool with a fun spin to it. Have fun learning this biology lesson with your kids. The game is a science activity for 1st grade, 2nd grade, 3rd grade, 4th grade, 5th grade and 6th grade. In the UK system of education, this is equivalent to science for year 2, year 3, year 4, year 5, year 6, year 7 and year 8. 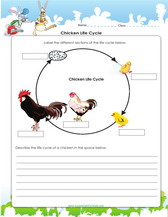 Worksheet on the life cycle of a chicken from egg, chick , growth.

One of the most popular domestic animals is a chicken. The closeness of humans to these birds dates back several centuries. This connection has established chickens and their parts as an important part of our diets. Entire restaurants like KFC and MacDonald have specialized menus around chicken parts.

On average, a chicken’s life span may last between three to five years. Some breeds may live longer. Every chicken goes through three distinct phases. These include: egg, chick and chicken. Each stage undergoes transformations that usher in the next stage. Let’s look at each stage in greater detail.

A mature hen mates with a mature rooster. After about 25 hours of this happening, the hen will form an egg. The egg formation process begins with a hen’s ovary producing the egg yolk during the ovulation process. As it travels down the oviduct, it gets fertilized by the sperm of the male rooster. As the fertilized yolk travels down the oviduct, it becomes covered with the vitelline membrane as well as egg white also called albumen. While still travelling down the oviduct, a covering of egg white and yolk continue to form externally. The egg shell formation follows this stage, covering all other layers within it. The egg shell is the hard external covering we see on eggs.

At this stage, a hen finds a comfortable and safe place to lay its egg. Hens may lay approximately 12 eggs; each egg is laid a day apart.

For the eggs to hatch out a chick, the mother hen has to sit on them to maintain a temperature that is similar to that of its body for about 21 days. There are breaks in between, allowing air to refresh the eggs. In large industrial scale farms, this process is facilitated through the use of an incubator regulated to mimic similar temperatures needed for the egg to develop.

The chick inside the egg relies on the egg yolk as a source of nutrition as it grows.  On about day 19 of the incubation period, chicks begin a process referred to as pipping. It involved the young chicks using their small tooth to peck a hole through the egg shell to facilitate oxygen intake. This hole will eventually serve as the exit through which the chick will emerge on day 21.

Chicks come out with wet feathers that eventually dry up and become fluffy. Most young chicks from day one can move about. The mother hen occasionally covers its chicks under its wings to keep them safe and warm.

True feathers start to develop five days later. Twelve days later, the chick begins to develop the wing feather and by day 30, they begin to look like adults although smaller in size. They will continue to grow and learn from their mother how to forage, roost and bask in the sun as well as all common chicken behavior. The mother hen separates from its chicks when they can do these things on their own. At six months, a chicken transitions into a full adult.

Young hens are called pullets while their adult male counterparts are called roosters. As young as 18 weeks in some breeds, pullets can start to lay eggs. They have this capability until about 72 weeks old. During the course of this period, hens will once again mate with roosters and lay eggs to begin the cycle allover again.

As females get older, they become wrinkled, dull faced and tend to lack the energy to move around vigorously as they used to do. Same for the roosters.

When next you have an egg for breakfast, think about the effort of the mother hen that laid that egg. If you loved this video, please share it and subscribe to our channel below.