This page features Comparison Numbers Worksheets for kindergarten Free. Learn to compare two numbers and find out those that are greater than, equal to or less than others. Children will be introduced to the concept through pictures of objects on worksheets.

Comparison of numbers in kindergarten

Compare and sort out 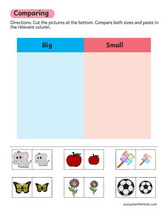 Compare and sort out worksheet.

When your child reaches kindergarten age, it is time to teach him how to compare two numbers. Morning meetings are a good time to talk about numbers and show what your child has learned so far. Counting and comparing worksheets are a fun way to introduce the concept and keep students engaged. In this article, we will go over several ways you can help your child succeed. Here are a few tips to get you started.

The best way to teach students how to compare numbers is to have them work independently in small groups while the teacher monitors each child. There are a few ways to do this. Math games are a great way to encourage independent practice and teach students how to compare two numbers. On this website you will find a few games related to this topic.

Young children need to be able to recognize and understand relationships between numbers. For example, seven is less than eight, but seven is greater than six. Once this concept is established, kindergarteners will build on it and eventually be able to use it to solve problems. One of the best ways to do this is through a Numbers of the Day program. This program provides daily math practice in just a few minutes. It's the perfect morning warm-up program for math.

Kindergarteners can develop their mathematical sense at a young age by comparing objects of the same size and then working backwards. This exercise also helps students understand the importance of height when making comparisons. In addition, this is one of the first steps toward abstract thinking.

In addition, children can use manipulatives to compare two numbers. Counting blocks, buttons, pom poms, and mini erasers are good tools for this activity. Have students line up the different manipulatives to see who has more of each type of object. Once students know how to compare two numbers, they can begin counting, comparing, and observing. They will also be able to tell if one number is larger or smaller than the other.

Greater than vs Less than

In this math lesson, students learn not only the difference between numbers, but also the concept of greater than and less than. This lesson includes the use of manipulatives to help young students understand the relationship between the two numbers. For example, students can line up buttons to see which number has more and then use a counting block to compare the two numbers.

Understanding of equality and inequality

Children's understanding of inequality and equality in kindergarten is an important first step in developing broader social awareness. Although they may not yet be able to give specific examples, they often notice when something is not equal. Often, children try to correct past inequalities by giving more or less to the person who has more resources. In addition, children recognize when something is not fair and use values to create an equitable situation.

Children are very perceptive when it comes to injustice and unfairness, and they often say, "But that's not fair!" This lesson is especially important at a young age when children are not yet fully socialized. When children are exposed to different characters and situations, it builds their resilience and problem-solving skills. Is not it nice to see this concept being learned through math?